The time has come to release an open beta version of SmallTime (currently at 1.8.1). As was mentioned in previous blog posts, this is a complete rewrite of SmallTime, which is optimised for much greater customisability options in future updates. After a very long pause without any new releases, I will return to a four-month release cycle, and you will get blogs with status updates more frequently. Unfortunately, to make this release according to schedule, the testing process was rushed and some features had to be cut from this release, the reason being material and physical preparation for possible war. The Army of Russian Federation invaded Ukraine, and almost two months ago there were bombs and rockets falling 200 km (140 miles) from the borders of the Slovak Republic, where I live. Fortunately, brave Ukrainian soldiers pushed Russian forces far enough for me to live in peace and continue with my work.

Next (and previous) releases

Previous alpha release of SmallTime (1.8.0) was available to testers with a direct link into the SmallSkill lab. Its main purpose was to test if SmallTime would be able to launch on other machines and if it would be stable. Some crashes were fixed very soon after the closed alpha release. Thank you very much for your time! Target for 1.8.1 open beta release was to provide the same set of features as the old versions of SmallTime. This release will be available from the SmallTime page on this website, but it will not be visible on the main page. There are still small issues to be taken care of in the next release. There is a detailed testing process planned for the upcoming version of SmallTime. The main focus will be to fix all little bugs and inconsistencies, after which there will be a full public release (version 1.8.2). With some luck, I could even bring in some of the new customisation options. 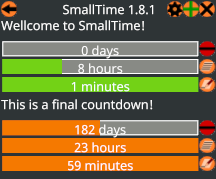 Open beta version of SmallTime. Optimised for much greater customisability in future updates.

Size: 3.8MB
Version: 1.8.1
Download for Windows65 Downloads
That is all for now. Oh and another thing… since some parts of this website broke down for some reason without any editing done, I will test this website and fix/update anything that is broken or did not age well since I will have free time capacity to do so. For now, enjoy the new release!