SmallTime 1.8.2 has just been released! Main focus for this version was to fix most of the bugs present in previous beta versions and fix all of the remaining performance issues. After this release a new phase of adding customisation options will begin. I hope that this release will be worth downloading for you and remember, if you find and bugs, please contact me at lubosmudrak93@gmail.com 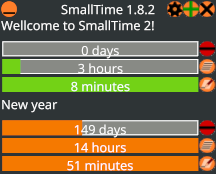 Smalltime is a simple task tracker that lets you have a constant look-out for all the important tasks ahead of you. Create a task, set up a reminder and don’t worry about missing it!

Version 1.8.2 features many bugfixes and a more comfortable user experience!

Confirmation dialogue when deleting a task: