For the few die hard fans. Most of my time is now dedicated to preparation for a college study next year (if I won´t get any job in IT industry in meanwhile). Progress is still very slow but I am trying to make some kind of steady schedule again. Anyway, here come the news:

Why no news for so long?

I began developing my own game engine for 2D games, or better said, basics of it. With a little bit of effort a simple mario-like game could be made with it. However, there are still many things to be fixed and improved. I do not consider this engine to be production ready. A long way to go. First development cycle (April-June 2015) was entirely dedicated to this project.

During the second development cycle(july-september) I was learning some HTML/CSS/PHP for making webpages. I made an intranet server to share files and documents inside the home network. I may post more when I solve, why the server began crashing like mad after upgrade to Windows 10. #bleedingedgetechnology . There is still a long path ahead of me, I need to learn much about MySQL and so on. However, there are many interesting projects possible with those technologies and another new project may be possible to start in 2016. 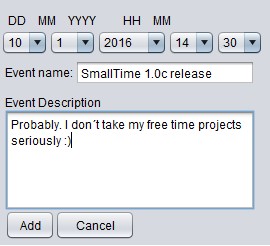 SmallTime 1.0c is in development with some optimisations and architecture changes already in place. I would like to spend alot of time by testing if those changes produced any bugs. If everything goes well, I will ad an option to edit existing countdowns. Another thing I would like to do stop all the crashes caused by corrupted data files. I encountered strange bug a month ago causing crash but I don´t have any reports of this error from anyone else. So, thats it for this developent cycle (october-december).